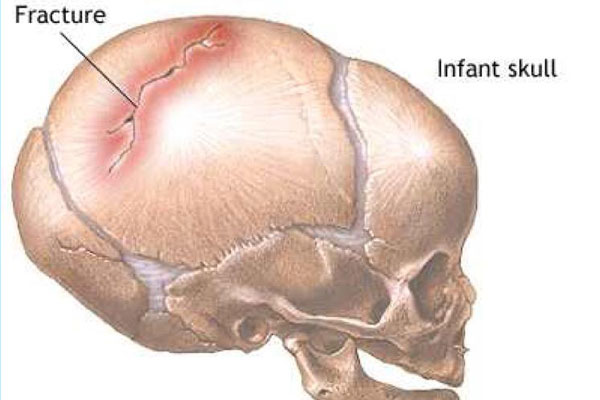 A skull fracture is a break to one of the bones which form the head. These include the Cranium (back of the head), Parietal bone (sides of the skull) and Frontal bone (forehead). Skull fractures occur due to an impact to the head, from either a blunt or sharp object. Common examples in sports include collisions between players in contact sports such as rugby, where fractures to the cheek bones and nose are common. Being hit by a ball (e.g. cricket) or stick or racket (e.g. hockey) can be one of the cause of facial or skull fracture.

A skull fracture is any break in the cranial bone, also known as the skull. There are many types of skull fractures, but only one major cause: an impact or a blow to the head that’s strong enough to break the bone. An injury to the brain can also accompany the fracture, but that’s not always the case.

A fracture isn't always easy to see. However, symptoms that can indicate a fracture include:

A skull fracture occurs when a force that is strong enough to break the bone hits the skull. Any type of impact to the head can cause a skull fracture, including being hit with an object, falling and hitting the ground, injuring the head in a car accident, or any other type of trauma.

In some cases, as in an open or depressed fracture, it may be easy to see that the skull is broken. Sometimes, though, the fracture isn’t obvious.

Serious symptoms of a skull fracture include:

Treatment for a skull fracture depends on several factors. A doctor will take into consideration the person’s age, health, and medical history, as well as the type of fracture, its severity, and any resulting brain injuries.

In some cases, such as in basal skull fractures, medication to control pain may be all the patient needs. The skull will heal itself in a majority of these instances. However, a basal fracture may require surgery if it results in excessive leakage of cerebrospinal fluid from the nose and ears.